Although Gunnz was challenged throughout the nomination process by more farther right members of the party, most notably Senators DexterAmmo (who abruptly resigned) and iThinkThereforeIFlam (who later became Gunnz's Vice President after Ibney00 was appointed to the Supreme Court), he secured the nomination easily. Flam did not decide to run on the ticket, and Gunnz selected fellow moderate Representative Polkadot48 of Chesapeake's 1st congressional district. Zero trailed throughout the process, eventually taking the frontrunner status after Representative NinjjaDragon dropped out. Zero eventually won the nomination over Speaker of the House APG_Revival, and due to a coalition with the Socialist Party, picked longtime friend and former Attorney General Dewey Cheatem to be his running mate.

Zero won the election alongside a Democratic wave in the Senate and the House. This marked the first Democratic trifecta since 2008, when Barack Obama led the Democratic Party to one.

In November 2019, then-Senator Gunnz011 defeated Vice President HurricaneofLies in the electoral college 337-201. This marked the first time a Republican had held the White House since Donald Trump's resignation. The Republicans were set to have a federal trifecta, however due to defecting votes, APG_Revival of the Bull Moose Party (in a coalition with the Democrats and the Socialists) became Speaker.

Throughout Gunnz's Presidency, many things occurred which sparred controversy. Most notably was when his Cabinet invoked the 25th amendment to the constitution and made Ibney00 president, and the events in Montana's 2nd amendment sanctuary counties. In the midterm elections, the Republicans expanded their senate majority while the Democrats (and Socialists) continued their hold of the house.

Due to a Supreme Court vacancy, Gunnz nominated his Vice President Ibney, and he was confirmed by a 7-3 vote in the Senate, and nominated iThinkThereforeIFlam who was also confirmed.

Throughout the primary season, Gunnz was in a tough battle with more conservative members of the party, most notably Dixie Senator DexterAamo and Chesapeake Senator iThinkTherforeIFlam. Both of them dropped out, Aamo after resigning and Flam after being confirmed as Vice President. Gunnz secured the nomination easily, and changed running mates to Representative polkadot48.

Many candidates entered the Democratic primary, however at the beginning, there were two front runners, Representative NinjjaDragon and House Majority Whip PresentSale, while smaller candidates including Governor ZeroOverZero101, Former Representative ConfidentInt, and Chesapeake Assemblyman Plebit8080 also ran. After a debate on foreign policy, both Ninjja and Sale dropped out, and Zero became the front runner. Even though Speaker of the House APG_Revival entered the campaign, Zero quickly received the nomination. 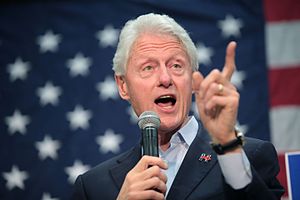 ZeroOverZero101 on the campaign trail in Orlando, Dixie

Two debates were held, one for President and one for Vice President. In the Presidential debate, Zero attacked Gunnz on many fronts, including his administration's record on LGBTQ+ rights and his errors throughout the term, especially around the 25th amendment invocation. In the Vice Presidential debate, Cheatem attacked Polkadot for her inexperience and views on issues (including universal healthcare, which she came out in support of while a Democrat).

The campaign was mostly fought in three states: Chesapeake (more specifically the second congressional district), Dixie, and Lincoln. Atlantic and Sierra were safe for Gunnz and Zero respectively, with neither opponent or their running mate making an appearance in the opposite. Throughout the campaign, both candidates and their running mates campaigned on the major issues for their party, which included healthcare, climate change, and foreign policy.

Retrieved from "https://modelusgov.miraheze.org/w/index.php?title=June_2020_United_States_presidential_election&oldid=5624"
Categories:
Cookies help us deliver our services. By using our services, you agree to our use of cookies.